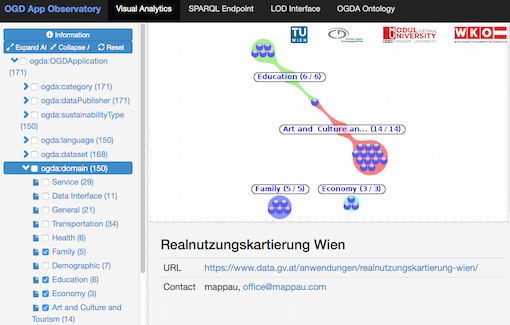 Aiming to support transparency, participation and government efficiency, governments around the world make their datasets freely accessible in open, machine-readable formats. Through such open government data (OGD) strategies, they stimulate the reuse of public sector information, allowing businesses and social entrepreneurs to create value from these datasets. One popular approach to make use of OGD is to create software applications (Apps) based on these datasets. Analysing various characteristics of these Apps could contribute towards better understanding of the (much-speculated) benefits and impact of the OGD movement, thus complementing other analysis approaches that primarily focus on the OGD datasets rather than their actual usage (for example, the Open Data Barometer [1]). Knowing the domains of these apps, the type of their creators (individuals or organizations), or the most used datasets can lead to important insights into the impact of OGD Apps on business and society.

The OGD Apps Observatory Vienna (http://data.ifs.tuwien.ac.at/ogda/observatory) focuses on the analysis of Viennese OGD Apps. The project creates metadata about various facets of these Apps and publishes this metadata freely as Linked Open Data (LOD). The metadata contains factual information imported from an RSS feed about Viennese OGD Apps (e.g., price, platform, dataset). It also includes more complex information harvested through human involvement (e.g., app domains, type of app creators or the sustainability pillar supported by the apps). Additionally, an ontology for describing OGD Apps (OGDA) was developed as part of the data publishing process, reusing, whenever feasible concepts from FOAF and schema.org. Besides an LOD browser and a SPARQL endpoint, access to the metadata is supported through an intuitive visual analytics interface, which aims to achieve a high degree of comprehensibility for users. Put together, these elements (OGDA ontology, OGD Apps LOD, LOD powered access points and visualisation) form the basis of a reusable and extensible framework for publishing and analysing information about OGD Apps, in other words: an Observatory for OGD Apps.

The main innovation of this submission is providing the core elements of and a concrete, Vienna-focused, example of an OGD Apps Observatory. Novel are: 1) the OGDA ontology for describing OGD Apps; 2) the OGD Apps LOD dataset for Vienna and 3) the example observatory that combines these elements to allow analysis of Viennese OGD Apps.

Governmental organizations can easily adopt the idea and the elements (e.g., ontology) of the OGD Observatory to: (1) publish LOD about these Apps; (2) to provide an appealing visual analytics interface based on the created LOD; (3) to perform analysis of these apps based on currently covered metadata types - or based in new metadata with which the framework can be easily extended. Similarly, researchers interested in diverse aspects of OGD can build on the idea and outputs of this project. We expect that this will trigger networks effects in the reuse (and extension) of the OGDA ontology. The technical solution combines mature technologies from the Linked Open Data Stack and visualisation libraries while embracing open standards such as OWL, RSS, schema.org, or FOAF.